“Autumn for Art” and Art materials 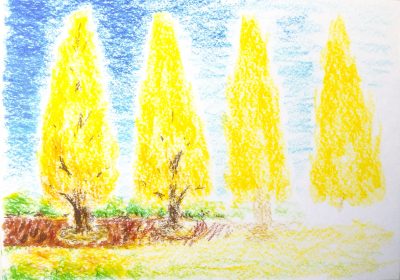 It’s September. The piercing sunshine has finally started to ease up a bit, and at night, we can hear the sounds of autumnal insects.

What is “Autumn of XX” in Japan? Most people would say “Autumn for reading,” “Autumn for sports,” “Autumn for appetite,” and “Autumn for art.”
Each of these has its own origin, but the reason it is widely accepted as such is probably because the dangerously hot weather has passed and people have more energy and stamina to do something in their spare time.
Then you look around you and see golden rice fields and trees that are just beginning to turn red. It’s nice to take a picture of it.
But sometimes you should try painting.

“I’m not very good at drawing.” “It’s too hard to ‘capture the outline of an object as a line and transcribe it accurately on paper’!” It seems that there are quite a few people who say that. Actually, the author is one of them.

There are a lot of Japanese people who think that line drawing is necessary for picture, but of course it’s not true. For example, if it is a casual scribble with crayon, it is only necessary to paint the paper in order from a bright color in a rough shape.

The ginkgo tree which I paint as a test, I painted in the following order and it became the state of the leftmost.
1) Roughly yellow 2) Light blue and blue for the sky 3) Brown for a brick-like pathway 4) Yellow green and green for the planting at the foot of the tree 5) Orange and ochre for shading the ginkgo 6) Finally, dark brown for the branches and trunk

Apply lightly at first and then paint over it so that it becomes thicker and thicker. If a color muddies the others when you mix it, the rule is to apply it later anyway. Otherwise, you can paint in the order you want.
Because the shape of this picture is simple, it took less than 30 minutes. If you have rolled-up crayons, your hands won’t get too dirty, so why don’t you try “Autumn for Art”?