A crayon that balances creativity and safety.

‘BabyColor’ crayons are mainly targeted at children aged between 2 and 4. The main feature of these crayons is the distinct round shape that makes them easy to hold and draw with.

These crayons are made in such a way that you can draw on paper with them without the color rubbing off onto your hands which is a huge benefit for young children.

Featuring a flat base and unique design, these crayons can also be enjoyed as toys too; stack them like building blocks or place them on your fingers like finger puppets!

‘BabyColor’ producer Kouji Seki of Buncho Corporation had the following to say about the product’s inception: 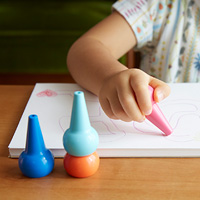 “The unique shape of ‘BabyColor’ crayons is the result of countless trial and error. We relentlessly monitored children using crayons to determine the optimum shape. This all started form an article feature in ‘CORE’ magazine some 30 years ago. The article noted how children grab hold of crayons (as opposed to holding them properly) and move their entire bodies to during each stroke. Indeed, crayons are a tool for drawing kept in neat boxes, but it’s also the first toy children pick up to explore colors.

From an age perspective, children aged 3 years and younger tend to just grab the crayons. By the time they reach 6 years old, most have learnt to hold them properly like pencils. This means that ages 4 and 5 are when most children are learning how to hold these properly.

From the information found in the ‘CORE’ magazine article and through trial & error, it was initially decided that making oversized grips for crayons was the way forward. However, crayons back then were prone to snapping, easily breaking when dropped on the floor or used a little too harshly. In addition, the pasty nature of crayons make for messy hands and clothes as well as stains all around house. To make matters worse, once the crayons had been used somewhat, they would be too short, making the notion of an oversized grip/holder extremely challenging.

To overcome this, we began experimenting with different materials. As a starting point, we took inspiration form a new pencil that had just launched around the same time. It was made from one material; a plastic infused crayon. It was durable, mess-free and most importantly we felt that we could mold it into the shape we needed. 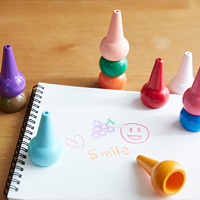 For the shape, we decided on a familiar crayon shape but with a round grip to make it easier to hold for children and the tip was made pointed to make it easier to draw with. After many prototypes, we arrived at the basic design you see you today which is made using injection molding”

The manufacturing process involves heating the ingredients and pouring it into a mold before letting slowly cool and cure. However, this turned out to be a lengthy process and so the design was revised with a hollow interior. Even with this revision, the crayon remained durable enough but another problem arose.

“At this point in the development process, there weren’t any air/breathing holes in the crayon. Children often have a tendency to put almost anything into their mouths so I tried this myself to see how dangerous it would be. As expected, trying to breath with the crayon in my mouth was extremely scary as I felt it shoot to the back of my throat. It was then we decided to add the air/breathing holes.

With the holes now in place, the crayons aren’t as susceptible to being sucked into the throat when put into the mouth. In the rare instance a child were to swallow the product, the air holes would still allow for the child to breathe.”

The materials used to make the ‘BabyColor’ crayons all fall within the safety guideline as set out by ACMI (USA) and EU Toy Safety Directive Testing EN71-PART3. The latter in particular pertains to the migration of certain elements (including 19 hazardous heavy metals) and sets out guidelines for the potential amount of said elements being produced/leaked upon ingestion. ACIM (Art and Creative Materials Institute) is a non-profit organization established in the USA in 1936 that tests and warrants various art supplies. Buncho Corporation, the company behind ‘BabyColor’ crayons and various other goods, became joined the ACMI testing process in 1983 has had all of their products assessed by the institute. Once a product, like the ‘BabyColor’ crayons has been approved, it is awarded the AP seal of approval by the ACMI.

Now in its 20th year of production, ‘BabyColor’ crayons are a long time best seller. Designed by a team of developers passionate about safety, usability and enjoyability, it’s a textbook example of Kids Design Products.